When the sketch is fully constrained the status bar will show Fully Constrained.

It is very important that you fully constrain all your sketches to assure that they are structurally sound. If you don’t, the geometry can change without your knowledge. So be sure to take control over your sketch geometry by fully constraining each sketch.

What do assembly constraints control?
Inventor assembly components have 6 rotational and transitional movements that can be constrained. As with any 3-Dimensional object, a part in an assembly can move along the X, Y, and Z axes, and it can rotate about each axis. Each movement type is called a Degree of Freedom, so every part in your assemblies has 6 Degrees of Freedom. Assembly Constraints control the Degrees of Freedom of each part in an assembly.

Display the Degrees of Freedom of the components.
To display the degrees of individual components and subassemblies…

Go Beyond the Commands! 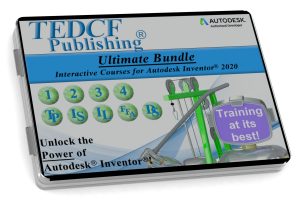 The fastest way to learn!
Try it Free!

Have any question, concerns, or comments? Please let us know.
Contact Us
Close Menu